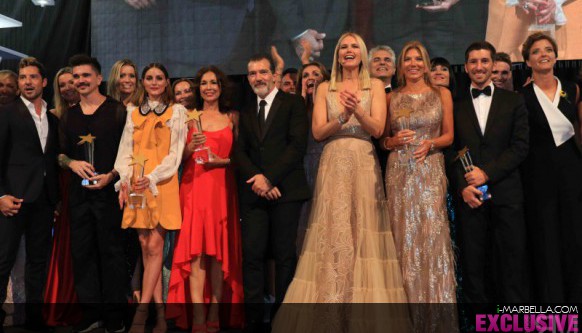 Family photo at the end of the 2018 Gala, VIP guests with Antonio Banderas Source: ramoscomunicaciones.com


Antonio Banderas and Sandra Garcia-Sanjuan for another consecutive year brought together top solidarity stars for the StartLite Gala that was celebrated on August 11, 2018. This was one of the largest meetings of artists and personalities of the year in Marbella. Among the international attendees were Juanes, Olivia Palermo, Bo Derek, Valeria Maza and many well-known faces of music, film, and television industry.

Last Saturday in Marbella, the 9th Anniversary Starlite Gala has experienced the most magical and special night with the celebration of its number nine edition that has brought together more than sixty national and international stars, as well as personalities from the business, social and cultural world that wanted to be part of this event to support and contribute with the most important charity Gala in Spain.

Another year full of excitement accompanied the most committed auction which once again, donated all the proceeds to the foundations: Niños en Alegría and Lágrimas y Favores, to later distribute the funds among various initiatives. This year, Starlite Foundation has made a donation to Fundación Quiero Trabajo, a foundation that encourages and empowers women to get job opportunities. All of this thanks to the funds raised through the charity concert “Homenaje a las Mujeres” that will take place in Starlite on August 17, its first office will be opened in Madrid.

Starlite Gala official hosts, Antonio Banderas and Sandra García-Sanjuán, who wore an elegant design by Elie Saab designer who collaborated in this edition of the Gala and Sarkany brand shoes by Antonella Rocuzzo, wife of Argentine star Lionel Messi, and Sofía Balbi, wife of Uruguayan soccer star Luis Suarez. The hosts Banderas and García-Sanjuán received more than four hundred attendees, in which they felt very grateful for their presence and collaboration in a unique night with record numbers that will undoubtedly change the lives of thousands of people due to the commitment and contributions of each one of them.

The exciting night began with a very special welcome from Antonio Banderas, announcing the great performances of the night. Joined by Argentinian model and businesswoman Valeria Mazza, Carlos Latre a popular comedian and who has been once again the exceptional presenter of this emotional gala, who has provided with his humor, great moments and anecdotes, including his already famous imitations of artists like Luis Miguel, Maná, Raphael or Manolo García.

Sandra García-Sanjuán, co-host of Gala Starlite with Antonio Banderas, dedicated a few words after the presentation of the foundation that she presides together with Alejandra Aleman, “Niños en Alegría”, and in which she stated that "25,000 children have been brought to school  thanks to this project."

The most wonderful power that big celebrities own, to inspire others,  to contribute to and transform the world, and that is the dream of the Starlite Foundation. " Sandra also thanked the media for "spreading our message, because thanks to them everyone knows what Starlite is," and to our sponsors Ford, Schweppes, Viña Esmeralda, Maxxium, Unicaja Foundation and Costa del Sol Tourism, for their support the Starlite Gala project. Sandra García-Sanjuán closed her speech with emotion, thanking Antonio Banderas, "a great friend and person, there should be more like him in the world".

Starlite Gala evening was full of special moments, such as the "Happy Birthday" that David Bisbal performed a cappella to Antonio Banderas, while a big cake was carried toward the birthday man, that set the final of the dinner that all people enjoyed.  Banderas wished "to be able to fulfill another 58 more".

Starlite is a musical festival that is held every summer, since 2012, in the quarry of Nagüeles, an open-air rock amphitheater, surrounded by greenery located in the Spanish city of Marbella.