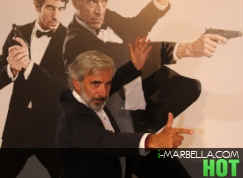 His adventures usually include going to a desert and, when returning, realising that he has made a completely useless trip. He is one of the author's most popular characters.

More information about the latest film is available HERE!