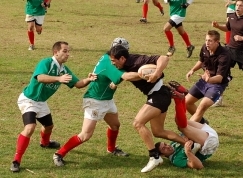 The start of the New Year saw Marbella Rugby Club back on the road to winning, despite the bad weather that the coast has been suffering recently. Marbella’s opponents for the first game of 2010 were CR San Jeronimo, who made the journey to the Bahia de Marbella ground from Sevilla.


The bad weather may have hampered any training to shake off any Christmas and New Year excesses in the week before the game, as Marbella went a try down to the visitors in the opening minutes. The home team fought back with two converted tries however, and went into half time leading 14-8.


Marbella were able to extend their lead 20 minutes into the second half, with two converted penalties to give them a 20-8 lead, before San Jeronimo struck back with a converted try to close the gap to 20-15.


But Marbella were able to strike back immediately with another penalty before going under the posts for a third time. The conversion made the final score 30 – 15 to the home side. The result puts Marbella Rugby Club second in the Andalusian league behind Granada University, and the team travel up the coast to play local rivals Malaga on January 24.