We are the Champions! 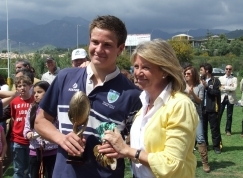 The first match of the day was between the Alevines/Sub-14 from Marbella Rugby Club & C. R. San Jerónimo of Sevilla. Finding it more difficult than expected, the home side had to work hard to overcome the squad from the Macarena region of Sevilla. Overall the match was played to a similar level on both sides. On the one hand the Marbella side played better with ball in hand, the Sevillans had a fierce defense & a strong tight game, thanks to a greater physical presence. At the end of the first half the locals had the advantage over their rivals with a solitary penalty kick (3 – 0).

At the re-start, the tone of the match remained the same, although with somewhat more of a bite to the Marbella attack. The benefit of this new dominance and possession of the ball, was an unconverted try and  the conversion of another penalty kick, taking the score to 11 – 0.  This was the final score, making Marbella Andalucian Champions.

In the other Final played at Bahia Marbella, the Infantil/Sub 16 team of  Marbella Rugby Club faced Cajasol Ciencias of Sevilla. In complete contrast to the previous match, there was no competition, with  complete and  utter domination by the home side, who took control from the off and  retained all the possession of the ball. The only part of the match where you could say there was some equality, was the amount of effort put in by all the players on both sides. The final score on the board was 67 – 3, and another Marbella team became Andalucian champions!

The other final  played last Sunday featuring Marbella was played in the Estadio de la Juventud in Almeria the teams facing each other were Costa de Almeria & Marbella Rugby Club Cadetes/Sub18.

These two sides were the most in form teams of their age category leading to the final. Almeria had focused hard on this match, taking advantage early on of their reliability of their kicker, looking for the penalties in the red zone, which told on the score board with 4 converted penalties & the conversion of their only try of the match.

A crunching tackle in Almeria!

For their part, the visitors had travelled far for this Final, with a few absentees (at least 4 main players missing: Lucas, Héctor, Jacobo & Phillip), which  put noticible strain on the back line attack. This meant that the match started with the home side camped on the visitors line, looking for the penalties, to then give the nod to their kicker & convert them into points. Throughout the first half there were the inevitable penalties awarded against Marbella & the home team went into the break with a lead of 12-0 after 4 penalties were converted.

With the whole second half to play, the half time talk from the Marbella coaches seemed to show its effects. With n othing to lose, the players from the Costa del Sol made a rebound with a try each to Alex & Stefano which Will managed to convert one of. However, when it was least expected, the home team scored their only try of the match & converted it to go into the final quarter with a worrying 19-12 lead. Marbella were not about to give up & they came back & scored through Will, who also converted his own try to bring the scores to a draw. With the full time whistle about to blow, there was just time to cross the line again, however this was disallowed by the referee, Mr. Ruiz Jimenez but would have given the victory to Marbella. Instead the draw of 19 all meant the dreaded penalty shoot out to determine the winner, & ended in favour of the home team (4 to 2).

Bad luck to Marbella but a great performance!

Marbella win away at home!