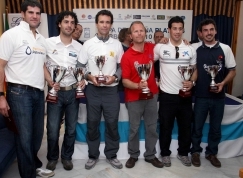 The World Champions Carlos and Anton Paz on board of 'Mexillon de Galicia' had to accept a disappointing second place, followed by Alvaro de Haro's 'Mundo Marino 25' with Diego Fructuoso at the helm. Weather conditions meant that racing was confined to Saturday, indeed, the boats completed three out of the four scheduled races thanks to more favourable weather conditions.

On the day the best was 'Vértigo' of John Bassadone, a local team of the Yacht Club of Marbella. His constancy and  good results (sixth place in the first race was his worst position, then fourth and second) surprisingly gave him a good advantage on 'Mexillon de Galicia' of the Champions  – the event favourites - who obtained two first places in the first and in the second race but slipped back after a 13th place in the third. 'Bribón-Movistar' of Marc de Antonio, one of the best Spanish crews in Marbella, finished only fifth and had to accept the disappointing result.


'It's a great surprise that we are the champions of the Spanish Cup – said Vértigo owner John Bassadone – 'but this is what is enjoyable in sailing. We worked hard during the three races on Saturday; we were regulars and there was a good harmony between the members of the crew (Óliver Góngora, Antonio Miguel Sel, José María Guerrero and Álvaro Martínez) , although we met just a few hours before the start!' Fernando Lago, the organsier of the Spanish Platu 25 class is satisfied: 'This regatta gathered more and more Platu 25 and Marbella confirmed to be perfect in organising events like the 'Copa de España' . The regatta was a real success and Marbella is getting ready to host other prestigious regattas like the Spanish Championship and other International events'.