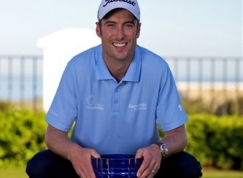 Two Major Champions, a Ryder Cup winner and a former Volvo Masters champion are the first four players to qualify and confirm their entry into the 24-man 2011 Volvo World Match Play Championship via the refined qualification criteria devised by Volvo and set to ensure one of the highest quality international fields on the European Tour in 2010.

Major Champions Graeme McDowell and Yong-Eun Yang; Ross Fisher, the current Defending Champion who made a successful Ryder Cup debut as part of Europe’s winning Ryder Cup Team; and 2008 Volvo Masters champion Søren Kjeldsen will all head to Finca Cortesín in Southern Spain for the Volvo World Match Play Championship which takes place from May 19-22, 2011.

Next year’s Championship, which will once again feature the successful round robin group format in the early stages, will see the field increased from 16 to 24 players with a modified qualification criteria guaranteed to gather together one of the highest quality fields in the world. The field will compete for an increased prize fund of €3.4 million and a first prize of €800,000, one of the highest on The European Tour.

Graeme McDowell is the latest to confirm having won the Andalucía Valderrama Masters last month.

The Northern Irishman, who won the 2010 US Open Championship at Pebble Beach and holed the winning putt for Europe in The Ryder Cup, has now reached a career high ranking of 11 on the Official World Golf Ranking.

McDowell, commented , “I am delighted to have qualified for my first Volvo World Match Play Championship. As everyone knows, I love match play so this will certainly be one of the highlights on my schedule in 2011. I am looking forward to my debut in this historic event and also to enjoying the wonderful hospitality on offer at Finca Cortesín which I recently experienced first hand when I stayed there during the Andalucía Valderrama Masters.”