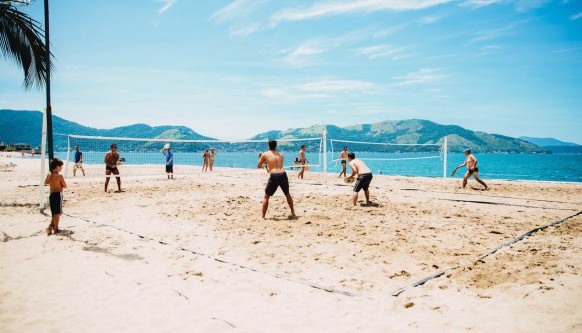 Going to the beach isn’t just about relaxing and sunbathing – it’s also a fantastic opportunity to get active and enjoy playing various entertaining games. You’re missing out if you’ve never played beach sports, as these activities are often even more fun than conventional sports. For example, beach volleyball allows players to throw themselves around to make difficult shots, while beach soccer is known for far more acrobatic tricks.

Beach football can be a less serious alternative to full-on gridiron football on a field. It usually involves “touch” rules, making it easily accessible for kids and adults. Of course, there’s no beating the real thing, so don’t expect beach football to hit the same levels of excitement as the NFL. Betting on professional football games is a better way to enhance your enjoyment of the sport, and checking the Super Bowl odds will give you an idea of who the in-form teams are so far.

Beach sports like football may not cut the mustard for the purists, but for most of us, they’re great fun. Nowadays, people have created several games to play specifically on the beach. Vacation time has never been such fun! Please keep reading for a selection of our favourite games to play at the seaside.

Beach soccer is a recognized sport, but you don’t have to be a professional to play it. Its history is inextricably tied to Brazil and the famous Copacabana beach. Beach soccer was all the rage during the 1950s, allowing Brazilians to enhance their magical style even away from the pitches or futsal arenas.

The first international beach soccer event took place in 1993, and the game joined the FIFA family in 2004. Beach soccer isn’t challenging to pick up, by any means. All you need is a ball, a few players and, ideally, something to create a makeshift goal out of. It really is that simple!

If you fancy a beach game that will allow you to unwind slightly more, why not try chess? This fascinatingly complex strategy game is perfect for relaxing in the sun. There is no onus to play quickly, so you can lounge and enjoy chess at the same time, especially with casual games against friends.

Chess isn’t just a good way to pass the time. Players will train and enhance various cognitive skills such as memory, critical analysis and forward planning. There aren’t many other beach games that can actively exercise your brain to this extent!

Places like Marbella are known for their tennis facilities, with superstars like Novak Djokovic and Rafael Nadal known to use the famous Costa del Sol Marbella, Spain destination for training camps. However, you don’t need to visit actual tennis training grounds, as you can have as much fun on the beach.

There are a few differences, mainly the absence of the ball bouncing, but beach tennis is hugely entertaining. You can play as seriously or casually as you want. Most people opt to see how long they can keep a rally going, but more experienced players test each other in competitive matches.

Beach volleyball is arguably the most famous beach game. The rules are similar to conventional volleyball, with the main difference being that it is played on sand. It is a fully-fledged Olympic sport with millions of players worldwide. Beach volleyball originated in 1915 during a game on Waikiki Beach in Hawaii but was popularized in California, where Paul “Pablo” Johnson devised an official set of rules.

Players of all abilities can enjoy beach volleyball, especially when playing casually. All you really need is a volleyball and a net. Many worldwide beaches have at least one set of beach volleyball courts. If not, you can buy a net and create your own pitch in no time at all.

Mini golf courses are popular attractions at many beaches. Mini golf is a great alternative to other beach sports, where sand can become a bit of an issue over time. These courses are typically situated a little away from the sand, allowing for a valuable opportunity to dust yourself off.

Mini golf is delightful, especially for kids. The most inventive courses are architectural masterpieces, so get down to places like UFO’s on Pensacola Beach in Florida for the best experience.

You cannot go wrong with a classic! Limbo is one of the simplest beach games out there, but it can still be the most fun.

Get a group of friends together and head down to the beach with a limbo stick to see who can get down the lowest!