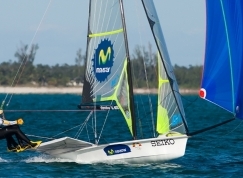 
The Spanish Pair won their third World Title this weekend

Iker Martinez and Xabier Fernandez of Spain have won their third 49er World Championship in the Bahamas this weekend  adding to their Olympic Gold medal from Athens in 2004 and Silver medal from Beijing in 2008. In true championship fashion, Martinez/Fernandez also won the events medal race, held in 8-10 knots. Two-time defending champions Nathan Outteridge and Iain Jensen from Australia made a strong push by winning both the morning races moving them into second which they held through the final results. Pietro and Gianfranco Sibello of Italy won the bronze.

The 25 boat gold fleet sailed two races in 16-23 knots which increased to 20-25 for the silver fleet's two races amidst tropical showers. The medal race sailors anticipated the heavy breeze, but unexpectedly the wind dropped to a manageable 10 knots.