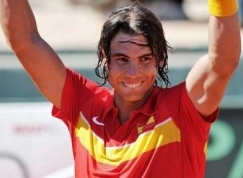 Spain go into this weekend's final as defending champions and with every reason to relish the prospect of a return to Barcelona's Palau Sant Jordi, the indoor arena that played host to their first Davis Cup final win in 2000.

Star player Rafa Nadal has been struggling of late, failing to win so much as a set in the ATP finals last week, but he and the rest of the Spanish team are such consummate performers on clay that to underestimate them would be unwise to say the least.

Captain Albert Costa was part of the team that overcame Australia in a memorable tussle at the Palau in 2000, when huge crowds screamed themselves hoarse in support of their team.

Along with Stepanek, the world number 12, the Czechs will pin their hopes on 20th-ranked Tomas Berdych who has the uneviable task of taking on Nadal in the first match.

As always in Davis Cup, the final will be decided on a best-of-five basis, with two singles rubbers on Friday followed by doubles on Saturday and the reverse singles on Sunday.

If Spain win they will become the first team to successfully defend the Davis Cup since Sweden in 1998.