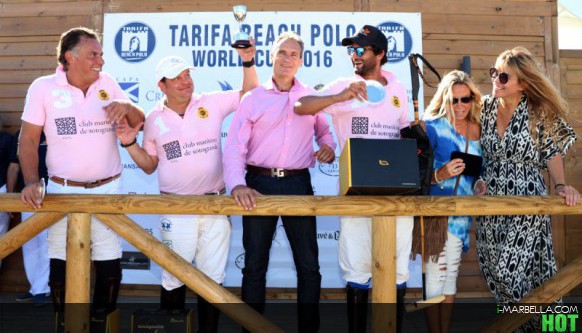 
The sporting celebration had a large amount of support from the public and the attendance of numerous important guests.

The winning team of the championship was captained by Guillermo Steta, under the name HOTEL MARITIME CLUB SOTOGRANDE. The team competed for the title facing three other teams of international standing, made up of three polo players with each one also under the initials of the sponsors: BALMS LAWYERS (who finished in second place), SCAPA, and CREDIT SUISSE (both returning for the third time as participants in the tournament).

After the day of sport, an array of prizes were given out by various brands. For the winning team, on top of the glasses given by Raquel Meroño, Juvé & Camps gave Magnum bottles, while MARBELLA COOL TV Show awarded some polo-related items. For the team in second place, Gómez and Molina awarded twin plates, while Trocadero gave some lunch vouchers for the team and their companions. The remaining two teams were given branded towels by SCAPA, while THE RIAT HOTEL gifted a night's stay with breakfast included in a double room. César Miño, who was awarded the accolade of best player of the tournament, received a mallet from Dr Vicente Campos courtesy of Taquito Polo Mallets.

The attendance at the sporting events and celebrations was declared “a success” by the organiser, Isabel de Borbón, the horsewoman now settled in Marbella. She warmly thanked all of the participants and sponsors. Spectators from Tarifa, Marbella, Sotogrande, and elsewhere came along to enjoy the event during the sunny weekend, which once again had the honour of a special speech by the “speaker” Daniel Garriador.

It serves to highlight that the captain of the winning team, Guillermo Steta, is the current president of the Mexico Polo Federation and has travelled to Tarifa expressly for this tournament. After the prizegiving, he gave Isabel de Borbón, the organiser, a medal of “The Angel of Independence” by appointment of “the ambassador for the Mexico Polo Federation in Spain”.

Among the audience it was possible to see some well-known faces from business, social, and public spheres, both from Tarifa and the whole of the Costa del Sol. These included Countess Gunilla von Bismarck and Luis Ortiz, Princess Bea von Auersperg and her daughter princess Cecile, the celebrated violinist Edmond Fokker van Crayestein, as well as the actress Raquel Meroño, who owns with her husband the beach bar “Carbones 13”, a fashionable new venue on the beaches of Tarifa, a collaborator of the tournament, and in front of which the sporting event took place. At the end of the day, everyone enjoyed paella laid on by Polo4Ever.

joy lopes 14-10-2016 00:49 My name is Joy Lopes, I never thought I will smile again, My husband left me with two kids for one year, All effort to bring him back failed I thought I'm not going to see him again not until I met a lady called Jesse who told me about a spell caster called Dr.Miracle, She gave me his email address and mobile number and I contacted him and he assured me that within 48 hours my husband will come back to me, In less than 48 hours my husband came back started begging for forgiveness saying it is the devils work, so I'm still surprise till now about this miracle,i couldn't conceive but as soon as the spell was cast,i became pregnant and gave birth to my third child(Taylor) if you need any assistance from him you can contact him via:Email (MIRACLESPELLHOME@YAHOO.COM),, or you can also contact him through his website http://miraclespellhome.wix.com/dr-miracles,,,,,,,
0