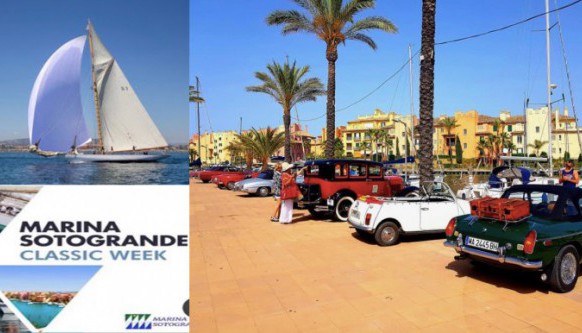 Marina Sotogrande Classic Week, one of the most important and exciting sailing events in Spain, took place in Sotogrande Marina this week July 2018 Source: http://i-marbella.com/


The fantastic sailing regattas celebrated in the beautiful blue waters of Sotogrande was such a success. Several people attended the first edition of Marina Sotogrande Classic Week where they enjoyed a parade of classic cars and four majestic 15M Class sailboats competing between July 3rd to 7th 2018

The second place was for the boat with flag UK Lady Anne, in hard struggle with the Spanish Hispania 1909. One point differentiated them at the end.

In the last position was the official boat of Monaco, Tuiga, who had many problems to reach Sotogrande by a storm in the Cabo de Gata and whose first day made them lose chances.

The absence of wind in the Sotogrande Bay caused the postponement of the 1st J80 Spain Health Excellence Trophy.

Worth to emphasize the presence in the ship Hispania as a guest and special crew of the director of the Agency of the Public Ports of Andalusia, Mariela Fernández, an employee of the Ministry of Development of the Junta de Andalucía. The historic Spanish ship, the Port of Sotogrande and the Junta de Andalucía itself have been given souvenir metopes for this great event, the most important of the nautical year in Sotogrande.

The awards ceremony was held in the area of the village located in the Ribera del Martín, with the presence of the mayor of San Roque, Juan Carlos Ruiz Boix, along with the shipowners and other authorities.

The last day of Saturday gathered a lot of people in Puerto Sotogrande to admire the beauty of these only four ships that remain in the world of Class 15M. With the test of Sotogrande, which will return, the International Circuit has started, which will now take them to the Balearic Islands.

The sailing event also aimed at promoting car culture the assistants could enjoy in the port a selection of American and European classic cars dating from 1988 or earlier famous vehicles from around the world.

The I Marina Sotogrande Classic Week has served as the start of the 15M Class International Circuit, which will now continue in the Balearic Islands.

Be part of the Marbella present, past, and future!