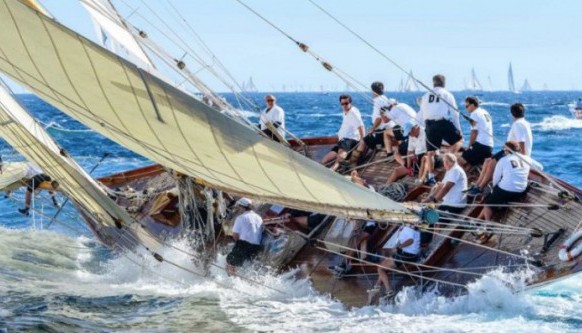 This summer Sotogrande port has the pleasure of hosting the Class 15M sailboats from the 3rd to 7th of July, 2018


One of the most important international sailing regattas in the south of Spain will be celebrated from 3rd to 7th of July in waters of the Sotogrande port: The 1st "Marina Sotogrande Classic Week". With the present of four majestic sailboats the 15M Class that will compete in the style of the sailing events of the Riviera. In addition, about twenty boats of different categories will also be present for the four-day competition.

This year's competition will be held in the waters of Andalusia who will serve as the opening of the international circuit of the 15M Class. Marina Sotogrande has officially been given the right to hold the Class 15M event in Spain for the next three years.

The sailboats of the Class 15M JI were the great dominators of the sailing world in the first two decades of the twentieth century. The acronym JI stands for International Rule and under it were built a score of units with lengths exceeding 23 meters.

Today there are only four survivors in the world: The Class 15M sailboats that continue to search for competition around the world are Hispania (Spain), Tuiga (Monaco), Mariska (Switzerland) and Lady Anne (UK) whom will exclusively compete in regattas and coasts representing their legendary class. Alongside them, approximately 15 classic boats, between 12 to 15 meters, that will compete in specific coastal regattas.

On the 14th of June, was officially presented at the Maritime Hotel of Sotogrande the Sailing boat event with the presence of the Mayor of San Roque (Juan Carlos Ruiz Boix), the direct manager of the Port (Miguel Angel Díez) and the owner of the ship Hispania (José Rabade) among others.

According to the organizers. From the 3rd until the 7th of July the Sotogrande Port will be offering access to a “Village” which will host a variety of events during the day. The Village is not only open to the participants but also to the public who are attracted by the presence of the classic yet unique sailboats.

The boats of the 15m-class JI were the great masters of the sailing world in the first two decades of the twentieth century. The acronym JI signifies International rule, they only built twenty units with lengths exceeding 23 meters.

Hispania (ESP1) is a yacht of 23.22 meters in length, the beam reaches 4.12 meters and 2.87 in drafts. The Hispania’s history is remarkable. After winning numerous regattas in Spain, England, and France, the First World War interrupted competitions. Tuiga sailboat has a length of 28.40 meters and 4.15 in drafts. In 1994 it was bought by Prince Albert of Monaco and moved to the Yacht Club Monegasque. The current captain being Pìerre Casiraghi, son of Carolina of Monaco. The Lady Anne represents the British flag, was built in 1910, in the 80s it still kept on sailing. At the end of the 90s she underwent a deep remodeling that affected the entire structure and interior, however, in June of 1999, it was to sail with its original rigging. Mariska is the Swiss boat Mariska began sailing at the year 2005 following a reconstruction lead by the Groupe Fauroux of Cannes, which included an impeccable helmet of mahogany, iroko, and teak.

This year 2018 will have four competitions. After the “1st Marina Sotogrande Classic Week" will come to the "Illes Balears Classic Regatta", in the Bay of Palma, taking place on the 15th until 18th of August. In September, from the 19th till 22th, the "San Remo Classic" comparison will take place and end with the "Les Voiles de St Tropez", in Costa Azul, from the 29th September until the 7th October.