Sharks win in the water! 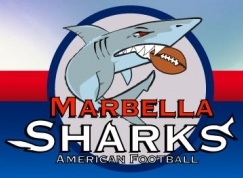 Last Saturday the Marbella Sharks played the Sueca Ricers in the opening game of the LNFA, the premier American Football league in Spain.

The Sharks started the game strong with a 15 yard touchdown pass from Quarterback Mark Murray to Wide Receiver AJ Scola . After this drive, both offenses got bogged down in a torrential downpour. The heavy rain made it difficult to hold on to the ball, which led to several turnovers and a back and forth struggle for supremacy. This defensive battle ended with a final score Marbella Sharks 6 – Sueca Ricers 0.

The Sharks will now travel to Granada on Saturday, January 30 for their second LNFA game against the Granada Lions. and are eager to play against their Andalucian arch-rivals!