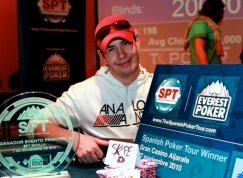 In the second largest turnout of the 2010 Spanish Poker Tour, 198 European poker enthusiasts battled it out for a €188,100 prize pool at the SPT Sevilla.

Even Tournament Director Thomas Kremser got in on the action. Wanting to experience his deep-stack, high-value structure as a player, Thomas was very satisfied with the results—even if he did go out on Day 1.

Now in its third season, the SPT is fast becoming one of Europe’s most popular poker tours, taking players to the most beautiful destinations throughout Spain. Following the huge turnout in Sevilla, the excitement is building up for the season’s € 300,000 guaranteed Grand Finale in Lloret de Mar on November 18–21, 2010!

The SPT Grand Finale will be streamed live in both English and Spanish on thespanishpokertour.com. Those watching from home will hear from both poker pros and amateur players as the action unfolds at the Tour’s final stop in 2010.