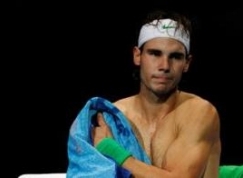 The world number 2 looked off form throughout the match Source: Reuters

After losing both of his previous matches in straight sets, Rafa has no chance of progressing any further in the elite eight-man event, even if he beats Novak Djokovic in his final round-robin match on Friday.
The Spaniard looked a shadow of the man who was rated as the world's best player until four months ago. Davydenko hushed the 17,500 fans in the O2 Arena by racing to a 4-2 lead in the second set, and despite a spirited fightback from the Spaniard, the world number six secured the win with a blazing forehand winner.