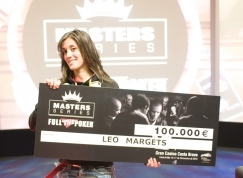 
The latest news from the Spanish Poker Scene

Perhaps its only fitting that during the month of Saint Valentine, that Spanish Poker Pinup Girl Leo Margets should be the player on everyone´s lips. The Catalan beauty took the title of ‘Spanish Poker Champion’ at the Full Tilt Poker Masters Series at the Gran Casino Costa Brava, as well as €100,000 in prize money and a specially commissioned ‘Masters’ ring.

Leo's gonna knock you out!

Leo underlined her status as one of most exciting players on the Spanish scene with the victory, which saw here go heads up with Cardplayer Italia editor and frequent player in Spain Massimiliano Luppi. The heads up was the culmination of three days of play at the Casino, that had seen 32 of the country’s top players demonstrate their skills over four disciplines - Deep- Stack, Shorthanded Shootout, Turbo y Heads-Up.

With this result under her belt, 2011 is already looking good for Leo.

In the Spanish Poker Championship, sponsored by Eurosuperpoker.com Pedro Javier Piazuelo, better known in the poker scene as “Pizu”, became the youngest ever overall champion. Only 22, Pizu’s outstanding 2010 was capped with taking the title, though he was taking a nap in his hotel room after being knocked out of the final event in Valladolid on the first day. But Anna Sanchez, who was Pizu’s closest challenger, called him as soon as she went out on Day 2 and woke him up with the news that he was the new champion! “It was one of my best wake up calls ever” Pizu laughed!