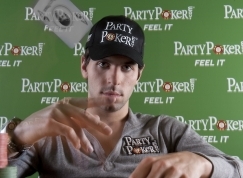 There was the definite smell of petrol around the Spanish poker scene last month, as the country hosted the F1 Grand Prix. And while the country was gripped in "Alonsomania" (and a collective loathing of Lewis Hamilton), several of the poker big guns also got in on the act.

www.partypoker.com  announced that they had signed Spanish F1 driver Jaime Alguersuari as a PartyPoker ambassador joining fellow F1 driver Giancarlo Fisichella, who is an ambassador for PartyPoker.it. The 20-year-old from Barcelona commented "Some say that I am a novice in F1 and I would say the same about poker. I have loved the game from afar but with all my driving commitments, I have a lot to learn. The popularity of poker in Spain is on the rise and I cannot wait to be part of it and improve my skills at the table by playing online. Poker is so popular amongst the F1 drivers at the moment, by becoming an ambassador for PartyPoker.com I aim to be the best of them all. I am planning on getting a new poker themed tattoo and hope the players at PartyPoker.com can help me choose it!"

Jamie finished a credible 10th in the Spanish Grand Prix and he also made an encouraging debut in the first of his bounty tournaments on PartyPoker.com, finishing in 53rd position in the $1,000 added tournament that featured 119 runners, where his style was described as "all action and hyper aggression"

Another poker company moving into F1 was Full Tilt Poker, who announced a new partnership with the Virgin Racing F1 team. Full Tilt's Chris Fergusson commented "With two leaders in their respective fields coming together, this is sure to be a groundbreaking partnership on the global canvas, providing yet another level of excitement for all fans.We are very excited to be associated with such a stellar brand as Virgin Racing" although his description of the Virgin Racing team as "stellar" was a little far fetched, seeing as the Virgin cars have spent the season thus far at the back of the pack. But with this tie in,  and with the problems surrounding Tiger at the moment, it could only be a matter of time before we see Phil Ivey described as "The Lewis Hamilton of Poker"

A few words with Jaime Alguersuari, the youngest formula 1 driver in history and friend of Mark Megens Osorio, Marbella´s own Karting champion. (3)