Poker back at Casino Marbella 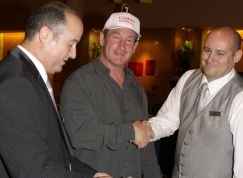 
Poker returned to the Casino Marbella after the summer break

The Marbella Classic Poker league returned to the Casino Marbella after the summer break, with 96 players taking part. Carlos Román took the victory and the winner’s cheque for €12,240, beating Sergio Pardo. Third place went to Adrián Daryanani of the "imaginatively" named “Sex Poker Team”, who rocked up in a Mercedes sports convertible and had the team’s name emblazoned across the back of his designer shirt!

Casino Marbella’s Friday Poker Fever made a welcome return after summer, with the aptly named Richard Cashman taking home €5,820 for his win. The popular tournament takes place every Friday.

Over in the UK, Paul Zimbler, aka “The Marbella Kid”, set a Guinness World Record when he played over 78 hours of Heads Up Poker during the World Series of Poker Europe in London. Playing at the Empire Leicester Square Paul took on a staggering 190 players continuously over the 78 hours and went head to head with members of the public and a range of celebrities and high profile poker pros including Mike “The Mouth” Matusow, Phil Hellmuth, Neil Channing, Jesse May, Devilfish, Robert Williamson III, Annette Obrestad and Michael Greco. The attempt was staged in aid of the Make a Wish Foundation and Sparks children’s charity and aims to raise over £50,000. Poker players and supporters wishing to get involved in the action or show their support should visit http://www.justgiving.com/Paul-Zimbler0