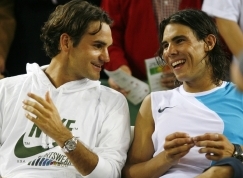 Federer is unavailable for the Davis Cup in March


Roger Federer will miss the Davis Cup match against Spain

Defending champions Spain will not have to face Roger Federer when it hosts Switzerland in a bullring in the Davis Cup opener.The Spanish have chosen Logrono's 11,000-capacity Plaza de Toros for the first-round series which takes place between March 5-7. The bullring features a retractable roof, with the hosts likely to choose a clay surface.

An anticipated Federer-Rafael Nadal match will not happen, however, after the Swiss tennis federation confirmed last week that the top-ranked player will not take part.Swiss No. 2 Stanislas Wawrinka is also in doubt because his wife is expected to have a baby near tournament time.

Spain defended its title last November with a 5-0 whitewash of the Czech Republic.