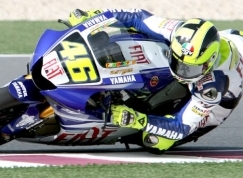 Will Rossi win in Jerez this weekend?


It’s the biggest sports event in Spain attracting over 120,000 devotees of all things 2 wheeled to the normally tranquil town of Jerez for a weekend of motorcycle madness

You really have to question the sanity of whoever came up with the original idea of building a motor racing circuit in Jerez. The place could be described as sleepy at the best of times and until the circuit hosted its first Spanish Motorcycle Grand Prix, Jerez was best known for its riding schools and sherry.

All that changed when the motorcycle boys roared into town, closely followed by their cousins in Formula 1. True, the megastars of F1 with their private jets and blackened out motorhomes didn’t return to race after 1997 (The mayor of Jerez, caught up in the excitement of the occasion, and perhaps with just a little too local product inside him, decided to hand out all the prizes at the trophy ceremony, instead of just 3rd like he was supposed to do so. This upset the officials who where waiting behind him and vowed never to come back!), but the heroes of MotoGP loved the place and the fans adored Jerez.

If you’ve never been to a MotoGP in Jerez, a word to the wise. Get up early! There are a few reasons behind this – assuming that you don’t normally spring out of bed with a song in your heart and a gleam in your eye at 6 every Sunday morning. Firstly you want to avoid the Sunday drivers who are either tooteling slowly along the Ruta de Torros, the scenic road up from Algeciras or getting stuck behind a coach of tourists on the way up to Ronda. Nothing is more frustrating than going to watch motorsport where the riders will be racing at over 200kph, while you’re stuck doing 20 behind the Ronda bus.

When you do get up to Jerez, don’t worry about following the signs to the circuit, you’ll be surrounded by bikers  - and we’re not talking about hairy arsed Hells Angels here or posers on their Harleys. The guys passing you on either side of the road are sports bikers, wearing brightly coloured racing leathers that wouldn’t look out of place in the paddock. Even the local motorcycle police get into the act, blowing their whistles and waving their arms like demented track marshals.

Once you’ve got into the circuit itself you have a few options available. Buy a baseball cap, T-shirt or flag to declare your allegiance to your favorite rider (Rossi or Lorenzo are safe options) or grab a beer. Rather than the hushed ambience of other sporting events, Jerez is more like a very macho carnival at times. Ladies, if seen at all, tend to be of the pit lane girl that holds the umbrella over the rider while he’s waiting to start the race or the bike bikini bimbo brigade, posing for some PR stunt or other.

Another specialty of the Jerez race is the fireworks. Without doubt, these are the loudest and longest you have ever heard, and it’s a wonder that the US hasn’t targeted Jerez as next in line for weapons of mass destruction. The firecrackers are especially likely to go off at any time from 7am onwards, covering everybody in smoke and accompanied by fino-fuelled cheers.

When the actually business of racing gets underway the first lap is mayhem. It’s a blur of speed and colour as well as smoke and noise (see fireworks above) You, of course will be sitting next to the Rossi fan with the air horn so pack some earplugs, as well as lunch as catering at Jerez is basic. The sheer speed of the motorcycles is awesome. If you’ve seen races on TV, it looks about half the speed when you see and hear them in the flesh, and every corner looks like a controlled crash. Make no mistake; these guys earn their money.

If a Spanish rider wins one of the 3 races (125,250 and 500cc) you’ll be involved in more partying, liquid and, yes, you guessed it, fireworks, than Carnival at Rio. And if the world’s favorite rider, the super talented Italian Valentino Rossi wins, expect unconventional celebrations. One year at Jerez, he stooped on his slowing down lap, got off the bike and made use of the portaloo at the side of the track!