How to do successful online marketing in Marbella this 2020?
Top Galleries
Sport 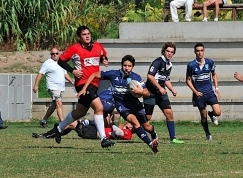 Action from the under 18s match Source: Marbella Rugby Club


The first team lost away in Sevilla, but the under 18s scored a resounding victory

Unfortunately this turned out to be a bad start for the team coached by Momo Faltoyano and “Killer” Gonzalez, which they expected due to the lack of effective players in their pre-season training, against a team that seems to be their biggest rival. With only fifteen players on the field, no reserves and with several newcomers, the Marbelleros were present at the La Cartuja stadium in Sevilla, to confront one of the strongest candidates for promotion.

Cajasol Ciencias, having been relegated from the  First National Division last season were substantially superior due to the order and discipline of their players on the pitch. However, the visitors, despite the lack of potential and the inexperience of some of their players,  were capable of withstanding the onslaught of the home side, maintain a reasonable score and still be able to score two tries without conversions.

On S unday at 1pm Marbella will  face another major rival who are hard to beat, Gibraltar Exiles. Hopefully during the week they can recover players and recover from this poor start to the season.

There was better news from the Marbella's under 18 side however, who ran out easy winners against the Gibraltar Dragons 48 - 0, scoring six tries.