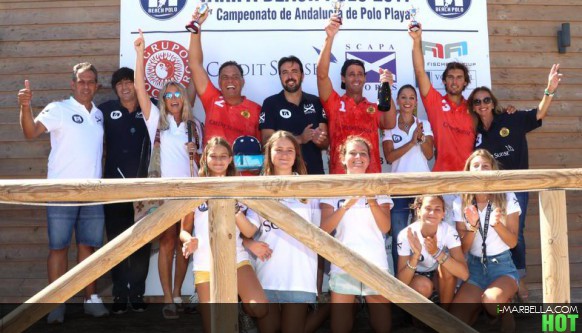 This past September 16th and 17th, Playa Los Lances was the centre stage for the Tarifa International Beach Polo Championship. Four teams played in the cup: Credit Suisse, Scapa Sports, Grupo Trocadero & The Fisher Group. Fans and sponsors witnessed the passion, dexterity, and teamwork of the players and approximately 60 horses along the two days of competition.

Isabel de Borbón, the tournament organizer, praised the exceptional features of Playa Los Lances as a unique setting to practice and promote beach polo across Europe. The first part of the Tournament was held on Saturday afternoon and continued early on Sunday.

The tournament was graced by the presence of the presidents of the Spain and Andalucia`s Sports Federation. To this day, Playa Los Lances is the only national setting for beach polo, due to the combination of speed, precision, and specularity.

On Sunday, team Trocadero formed by Niclas Johansson, Jamie Le Hardy and Per Jocabsson was declared as the tournament’s Sub Champion meanwhile Team Credit Suisse integrated by Carlos Piñal, Diogo Gallego and Álvaro Muñoz Escassi was crowned as the International Tarifa Beach Polo champion. Congratulations to the winners, see you all next year!