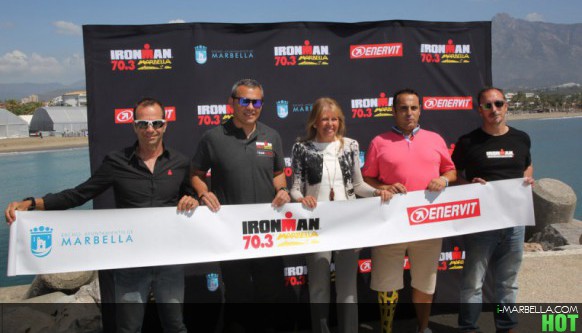 
Mayoress Angeles Muñoz presented The Trial for the IRONMAN 70.3 Marbella edition that will take place on April 29, just 3 days before the triathlon at the stand of Puerto Banus, Marbella 2018

The first edition of the Ironman 70.3 to take place this Sunday, April 29, in Marbella "will reinforce the image of our city in the world” as was stated by the mayor, Ángeles Muñoz, at the presentation in Puerto Banús.

This event will bring together 2,500 athletes from different parts of the world. Muñoz, accompanied by the Councilor for Sports, Javier Mérida, the director of Ironman in Spain and Portugal, Agustín Pérez, and the directors of the race and the organization, Álvaro Lucena, and Pablo Vázquez, respectively, stressed that "This is a city project that transcends the purely sporting plan"

Muñoz thanked the work of the organization, the different municipal delegations and municipal officials who have made possible over the years that this meeting is taking place. "I am convinced that at a sporting level it will be a success and that it will generate an important impact on the city" she also stated.

For his part, Javier Mérida, who will participate in the test, said that "it is a dream for the city to have this race that will have an incredible impact, uniting two major brands such as Ironman and Marbella"

In this sense, the director of the race in Spain and Portugal, Agustín Pérez, expressed that "the location is extraordinary for the development of our sport to which we must unite the maximum levels of quality in services"

In addition, Pérez detailed, that 70% of the participants come from foreign countries and that this test places the city "in the Champion League of triathlon", with an impact forecast for the municipality of around 10 million euros and a movement of around 10,000 people.

As for the technical route of the race, Lucena explained that the participants will have 700 volunteers helping through the process.

Participants will take the exit to swim 1,900 metres and, after the transition, located on the Avenue of the United Nations, will travel 90 kilometres by bicycle through the port of Ojén, ascending along the road of the 'caracolillos', and touring places such as Monda, Coín, and Cártama.

Finally, the athletes will return to Marbella to travel 21 kilometers on foot along the Paseo Marítimo to finally reach the finish line on the beach of Puerto Banús.

Marbella is located in the world-renowned Spanish Costa del Sol and is famous for its crystal-clear beaches and extraordinary mountain terrains.

Surrounded by the ocean and amazing mountains, it is one of the most beautiful locations in Spain, and also home to one of the most luxurious marinas in the world, Puerto Banús.

This way, the sunshine city of Marbella will host the IRONMAN Spain 70.3 offering the most impressive dare to those participating and an amazing and relaxing environment for their familiars and the ones following the event for which, the City Council has arranged a special mobility plan for Sunday with modifications of bus lines and street cuts!

IRONMAN triathlon is considered one of the most difficult one-day sports events that you can participate in.

Organized by the World Triathlon Corporation It classically consists of a 3-stage marathon including 3.86Km of swimming route, a 180Km bicycle route and 42Km of running stage in that order pushing resistance and skill to the very limits.

Get to know more!

Make sure to follow us on YouTube to stay updated and on trend with the best videos, interviews, and information about the city of Marbella and all Costa del Sol!