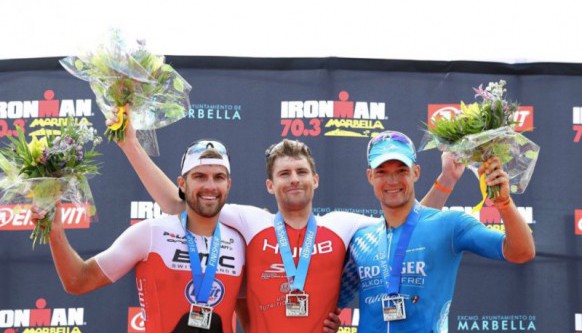 
IRONMAN 70.3 has been celebrated for the first time in Marbella, Spain during the weekend of April 29, 2018. The fast British runner David McNamee got the first place with 03:57:46 time in the triathlon and the German Laura Philipp won women's podium with a time of 04:25:29.

After an awesome final Sprint, David McNamee is the First Champion of the IRONMAN 70.3 Marbella and Laura Philipp took her the victory as the First woman crossing the ending line.

Marbella has been the first scene of the IRONMAN 70.3, a test included in the world calendar that has gathered more than 2,500 triathletes. The inaugural IRONMAN 70.3 Marbella was much more than an appetizer for the 2018 European Tour.

The first edition of the event in Spain was highlighted by a sensational sprint final in the men’s race. After the swim course had to be shortened due to wind conditions in the morning, then the athletes embarked on a tough bike course perfectly suited to strong cyclists like France's Romain Guillaume and Germany’s Andreas Dreitz. Both caught up with the fastest swimmer Daniel Baekkegard and came off the bike with a lead of more than 2 minutes over Chris Leifermann (USA) and the fast British runner David McNamee.

McNamee and Leifermann started the run together and finished side-by-side. They ran the whole course shoulder to shoulder, with McNamee ultimately sprinting to the win.

A complete list of the winners can be found here

"Once again, thank you very much to all of you who have made it possible, once again our city shows that it is committed to sport and events of this magnitude." Said the Mayoress of Marbella.

The mayoress Ángeles Muñoz, has endorsed the event and attended the awards ceremony. In the men's category, the British David McNamee has won, followed by Chris Leiferman and Andreas Dreitz. The women's podium has been integrated by Laura Philip, Marta Bernardi, and Daniela Saemmler.

The women’s race ended up with three German pro athletes finishing in the top five. Spain’s Judith Corachan Vaquera and Germany's Anja Beranek led the field out of the water, but top favourite Laura Philipp was only a few meters behind. Philipp moved to the front early and never let the lead out of her hands again. Thanks to her solid running strength, Philipp proved even more that she will be one to watch this season. Italy’s Marta Bernardi surprised with a runner-up finish among the German squad.

Big Congratulations to the Winners!

Ironman 70.3 Marbella attracted 2,500 athletes from around the world and offered 50 qualifying slots for the 2018 Ironman 70.3 World Championship in South Africa.