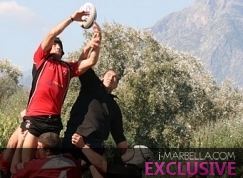 Line out action from the match Source: Marbella Rugby Club

Marbella Rugby Club scored their first victory of the season in a close fought win against Gibraltar Exiles last weekend. The return from injury of many of the first team meant that Marbella were able to put out a much stronger team than the one that lost in Seville in the first match of the season and had a squad of 22 players.

Marbella try to break through the Gibraltar defence

In a physical match, Marbella scored the only points of the first half, and lead at half time 3-0. A try by Chris and convertion put the local side  up 10-3 and penalties by Facundo gave Mareblla a healthy 16 - 3 lead with only 10 minutes to go.

Gibraltar made a fine comeback however, converting a try beneath the posts to make it 16-10 and a second try made it 16-17 with only two minutes to go.

But with the seconds ticking away, Marbella were awarded a penalty from 45 metres out that Facundo slotted to make the final result 19-17 to the home team! A fantastic result against strong opposition.