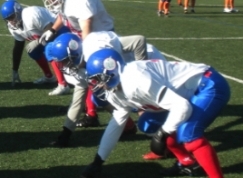 Action from the game Source: www.marbellasharks.es

On Saturday, the Marbella Sharks improved their LNFA record to 2-0 with a solid victory over the Granada Lions. The Sharks started the game strong scoring early on a 28 yard touchdown pass from Quarterback Mark Murray to Wide Receiver  AJ Scola . Running Back Matt Thomas  ran in the extra point to give the Sharks an 8-0 lead.  Later in the first quarter of play, AJ Scola scored his second touchdown with an 85 yard pass completion from Mark Murray.  This was the longest touchdown pass completion in Sharks history.  The Sharks were unable to convert the extra point, which gave the Sharks a 14-0 lead at halftime.

Early in the 3rd Quarter, the Lions scored a touchdown, changing the score to 14-6.  During the Lion’s extra point attempt, Matt Thomas intercepted the pass and then pitched the ball to AJ Scola, who successfully ran the ball into the end zone, which increased the Sharks lead to 16-6.  The Sharks then put the game away by scoring two running touchdowns by  Matt Thomas (22 yard touchdown run) and Fullback  Jose Toquero  (2 yard touchdown run), which resulted in a final score Marbella Sharks 32 – Granada Lions 6.

The Marbella Sharks Defense shutdown the Granada Lions Offense through a combination of hard hitting tackles by Linebackers Aleksi Astor, a.k.a. “AXE” (No. 59), Matt Thomas (No. 6), and Adam Bott (No. 53) and game changing interceptions by Cornerback  Jose Carlos (No. 26), Safety  Juan Jose Villalba, a.k.a “KANUTO” (No. 1), Matt Thomas, and AJ Scola.  Each of these defenders had one interception during the game.  The Sharks also improved their defensive line play with sacks from Damian Ferrari (No. 46), Marko Arola (No. 50), and Lixander Lares (No. 68).

The Marbella Sharks will attempt to continue their winning streak during an important game against the Coslada Camioneros on Saturday, February 6th at 18:00 at Santa Maria (Las Chapas) field in Elvira.  The Sharks Cheerleading Dance Team has been working on new dance routines to help generate an exciting atmosphere for this game and DJ Azzuro will also be cranking the volume to pump-up the home crowd.  Let’s Go Sharks!!!