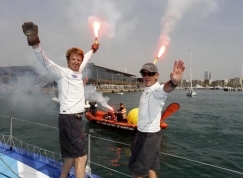 The winners arrive back in Barcelona! Source: Nico Martinez

Crossing the finish line on Monday morning at Jean-Pierre Dick (45) and Loïck Peyron (51) won the second edition of the Barcelona World Race on Virbac-Paprec 3, completing the 25,200 miles round the world race in 93 days, 22 hours, 20 minutes and 36 seconds at an average speed of 11.18 knots.

Virbac-Paprec 3 back in Barcelona after completing the 25,200 miles of the race Photo. Jorge Andreu

On arrival at the dock in Barcelona Jean-Pierre Dick described his feelings on winning a second consecutive Barcelona World Race: “A lot of emotions, quite indescribable, I am so happy to be here. I had my objective and today it has been satisfied. It is magical the way we won it together. Thanks Loïck for doing this race with me and putting up with me, magical to live three months among nature around the world, living our passion, and technologically it’s quite special. Thank-you and thank-you Barcelona for this race, it is ideal. Double handed around the world is fantastic. Thank-you also to my sponsors, I am very proud to have these people with me.”
The French duo highlighted their drive and pace when they set a new 24-hour speed record for IMOCA Open 60-footers of 506.33 miles on January 22nd (average speed 21.1kts)

Their winning course displays all the polished hallmarks of a near perfect execution. Their meteo and navigation strategy in each sea and each ocean, around the classic course, which takes in the three great Capes – Cape of Good Hope, Cape Leeuwin and Cape Horn but which, uniquely for the genre, climbs from the south Pacific through the Cook Strait before descending just as quickly back to the hostile ocean – has been almost faultless.