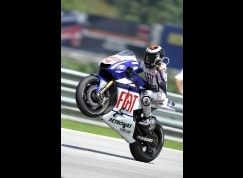 Third place in the race was enough to give him the title Source: yamaha.com

Fiat Yamaha rider Jorge Lorenzo clinched the 2010 MotoGP World Championship on a day that saw Valentino Rossi return to winning ways in Malaysia. Third place for Lorenzo - his thirteenth podium from fifteen races so far this year - was enough to make him only the second Spanish rider ever to win the premier-class crown. Rossi meanwhile put on one of the displays of his career after dropping to 11th at the start, taking his 46th win for Yamaha.

Lorenzo got a brilliant start from pole and set off in front with Andrea Dovizioso in tow, whilst Rossi, starting sixth, slipped right back through the field in the charge to turn one. A few corners were enough to let the Italian know that all was not lost today however and he quickly began to pick off his competitors, scything through the field to make it up to third by just the fourth lap.

By now Dovizioso was putting pressure on Lorenzo and on lap nine the Spaniard gave way to the Italian, knowing that finishing safely was more important than the winner's laurels. Next time around Rossi passed his team-mate and set off after his compatriot, despatching Dovizioso in turn at exactly the same point on the next lap. Dovizioso mounted one more challenge four laps from the end but Rossi, still the reigning World Champion for a few more minutes, was determined to stand on top of the podium and eventually crossed the line 0.244 seconds ahead.

It was Lorenzo's day however and third place for the 23-year-old was enough to seal him an emotional first premier-class title to add to his two 250cc crowns. It was a special moment for the Mallorcan, who has won seven races this year and finished off the podium only twice in a remarkable display of consistency that shows him to be a deserving champion. "This is a dream come true for me today, I can't really believe it yet" he said " Now we can relax and enjoy the last three races of the championship, but first of all we are looking forward to celebrating tonight!"