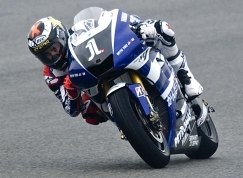 Yamaha Factory Racing rider Jorge Lorenzo used his M1 to deliver a master class in wet riding yesterday, delivering a flawless performance to take victory in front of his home crowd at Jerez.

The second race of the 2011 MotoGP Championship was played out on treacherous track conditions that claimed a number of victims over the 27 laps. Slipping comfortably into second in the first lap Lorenzo stayed in contention in the top three for several laps, keeping calm and graduating to first position as rivals Stoner, Rossi and Simoncelli all crashed out of contention.

Team mate Ben Spies was denied his first MotoGP podium as a factory rider with just three laps remaining of the race. Having initially dropped to sixth from the start grid Spies’ riding style was on a par with Lorenzo, laying down smooth consistent laps on a track that was wet in some places and drying in others.

Having gained half a second a lap on second place man Pedrosa he caught and passed him, raising the possibility of a Yamaha one two on the podium. Disaster then struck on turn five as slippery conditions and worn race tyres brought the Texan’s race to a premature end, losing the front and sliding off the track.

Lorenzo’s victory propels him to the top of the MotoGP Championship standings with a tally of 45 points, nine points clear of Pedrosa in second. Spies heads to the next round in Estoril in four weeks time having dropped to 12th in the standings with ten points and looking to make up for his disappointment.

Lorenzo looking to win in Estoril