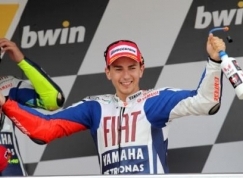 Jorge Lorenzo produced one of the rides of his life to take a superb win in Spain yesterday with a full-to-bursting Jerez providing a fitting amphitheatre for his first MotoGP win on home soil. Valentino Rossi finished third, making it a sixteenth double podium for the Fiat Yamaha pair since 2008.

Lorenzo got a bad start and had dropped from second to fifth by the second lap, as he struggled to find a rhythm with a full fuel tank. On lap five he was able to pass Casey Stoner and then, five laps on, Nicky Hayden but he looked destined to stay in third as he languished 1.5 seconds adrift of Rossi, who was in turn the same distance from Pedrosa. With a third of the race to go however the Spaniard picked up pace, suddenly the fastest man on track as he stormed up on his team-mate. On lap 22 he despatched the Italian but with only five laps left and a two second gap a victory still looked unlikely. The tenacious youngster was not giving up however in pursuit of a sixth premier-class win and he rapidly gained on his fellow Spaniard to bring himself within striking distance on his penultimate lap. His first attempt to pass resulted in a dramatic moment as they both momentarily looked like running off track and in the end he had to leave it to the last lap to make the definitive move, passing Pedrosa on the brakes at the end of the back straight and crossing the line 0.543 seconds ahead. Lorenzo, who turns 23 on Tuesday, celebrated in hilarious style by leaping into the lake in the middle of the circuit, much to the rapture of the home fans who were already celebrating Spanish wins in the 125cc and Moto2 classes earlier in the day.


The Championship is now led by Lorenzo with 45 points, while Rossi is four points off him in second. The riders now have a three-week break before the French round at Le Mans on 23rd May.