Lorenzo looking to win in Estoril 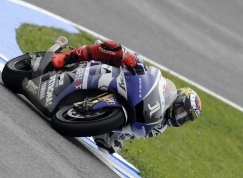 Reigning MotoGP World Champion and current Championship leader Jorge Lorenzo returns to Estoril looking to extend a perfect score sheet from the Portuguese circuit. So far the young Mallorcan has three consecutive pole position starts, race wins and fastest laps, taking nothing less than victory from every Estoril race of his MotoGP career.

The later scheduling of the Portuguese race in last year’s calendar meant Lorenzo raced at Estoril in 2010 having already been crowned World Champion. He went on to deliver Yamaha’s third consecutive Triple Crown that weekend with the help of his then team mate. A flawless performance under treacherous conditions in Jerez last month delivered Lorenzo’s first race win of the season, the incident filled first Spanish round leaving most of the competition struggling to stay upright and reach the chequered flag. He arrives at Estoril nine points clear of his closest rival at the top of the Championship standings.

Yamaha Factory Racing rider Ben Spies heads back from his four week break in the USA preparing for his first Estoril MotoGP race. The 2010 round which saw Monsoon weather disrupt qualifying had initially looked positive for the then satellite Texan rider, combined practice times giving him a second row start for the race. An unfortunate high side on the second of two sighting laps however resulted in a dislocated ankle meaning Spies has yet to complete a MotoGP race here and has yet to turn a wheel on a dry Estoril track. The 2010 rookie of the year had been on track for his first podium of the year at Jerez last month. He had been running in second behind his team mate until he joined the many riders to crash out as the changeable track surface took its toll on the worn out rain tyres. Spies arrives in Estoril sitting in 12th in the Championship with ten points.

The Autodromo Fernanda Pires de Silva sits just seven kilometres from the Atlantic coast and as such is notorious for dramatic weather changes; riders can see conditions change in seconds from warm sunshine to high winds and gusts of rain. Estoril provides one of the most challenging circuits for set up, featuring one of the longest straights of the MotoGP calendar combined with the one of the slowest corners. Lorenzo and Spies will need all their rider skills to negotiate the slow twisty sections then hold their nerve for the high speed 200km/hr kink at turn five and the infamous final Parabolica corner leading to the finish line.


Jorge Lorenzo commented "This week we will be in Portugal, a country where I've had nice moments! In Estoril I got my first victory in the MotoGP class in 2008 which I repeated over the last two seasons. The track has turned into a talisman for me and it is the place where the astronaut always comes back. We have been training for a month, and I hope that this makes us fit for a good race. We are in front of the standings, but it is very early and it is just the beginning"