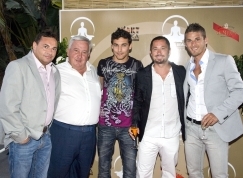 Sevilla winger Jesus Navas has admitted that playing for Spain is not easy and acknowledged that he still has work to do if he is to be included in the squad for next year's World Cup finals in South Africa.The 24-year-old made his debut for La Furia Roja in the 2-1 win over Argentina on Saturday, coming in as an 81st minute substitute and afterwards said it was "an immense joy"."What I must do now is to take the maximum from the games for my team, Sevilla, and the national team. I have hope but it depends on the coach [whether he makes the World Cup squad]. Right now I'm proud to have debuted with Spain. The rest will come gradually. The World Cup is the greatest thing for any footballer," he declared."Playing in the national team is not easy. The level of the players here is higher, the best. The ball moves very quickly and that suits me. I am here to help, to lend a hand whenever I am needed. I have to keep growing and wait for my opportunity."