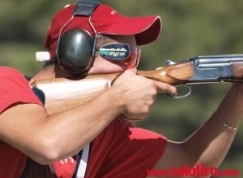 
This sponsorship of the Da Bruno Restaurants is one of a range of sponsorships, including charity, which the restaurant group does in order to support the local community.

Enrique Cortes won his silver medal at the World Championship Universal Trench, which took part over the last weekend of July  at Anienne Valley, Rome, Italy.
The 16-year-old, who was leading throughout the competition, achieved a successful scoreof 190 plates (out of 200.) However, in the final, the Frenchman Thomas Ward took the lead and won the World Championship by a single plate.

In the  team competition, Cortez contributed to Spain's silver; the team were beaten by the hosts, Italy, but came out ahead of Great Britain.