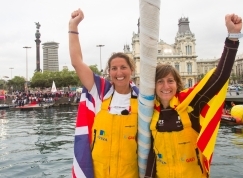 
Anna Corbella becomes the first Spanish woman ever to sail and race non stop around the world,

Unstoppable, unshakable duo Dee Caffari and Anna Corbella sailed into the record books this morning when their Owen Clarke designed IMOCA Open 60 GAES Centros Auditivos broke the finish line of the Barcelona World Race in sixth place, stopping the clock at 07.17.18hrs UTC for an elapsed time of 102 days, 19 hours, 17 minutes and 18 seconds.

They were totally united in their joy as they crossed the finish line on the bow of Caffari’s boat which had already taken her once around the world in 2008-9.  The morning was chill with dark grey clouds hanging low over the Barcelona skyline as the GAES Chicas sailed their final miles upwind, but their smiles radiated their sheer happiness from several miles before the line: “We were unable to sleep last night because of the nerves and emotions.” Confessed Anna Corbella Caffari,who has more experience of such race and record finishes, was nonetheless rendered almost speechless by the warmth of the welcome offered her by Corbella’s home city.

Corbella becomes the first Spanish woman ever to sail and race non stop around the world, while the unstoppable Caffari maintains her remarkable record in the extreme discipline of short-handed and solo ocean racing, by completing her fourth circumnavigation since she first went all the way around the globe in 2004-5. No other sailor in the world has sailed around the world more often in the last six years!

On completing the Barcelona World Race, Dee commented: "I'm very happy and very proud of what we achieved. Four boats didn’t make it and we did make it, and we did it non-stop which is what we wanted to do. And we had other challenges to overcome, and we did all of that. I think overall performance-wise we’ve got to be happy, we’ve achieved something that’s quite special and we can’t forget that not everybody gets to sail around the world non-stop. But it’s still in me, I’ve still got to get a top five place!"

The vastly experienced Caffari paired up with Corbella a little over a year ago on a fast track programme which was designed to step the Catalan former Olympic 470 dinghy aspirant turned Mini sailor up to complete a full racing circumnavigation on this race.They have sailed a solid, well considered race which showed Caffari’s increased confidence in her reliable boat

Anna Corbella spoke of their partnership, saying "We really developed a really special relationship. I thought at the beginning that living together was going to be the most difficult experience in this sailing round the world. But you know, you haven’t got any other chance, so you depend on each other, you have to help each other, and that develops a very special relationship, and in fact I was surprised. We had a very, very good time, no arguments, same objectives, always pursuing the same goal, so it was great.”