Full Tilt at the Casino Torrequebrada! 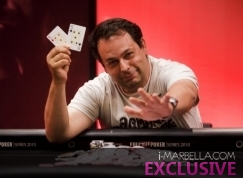 
Italian Luigi Tantari who took the victory and first prize of €60,000

The Full Tilt Poker Series made the trip down to a sizzling Costa del Sol in June for the second round of the tournament at the Casino Torrequebrada. And although Spaniards made up the majority of the final table, it was an Italian, Luigi Tantari who took the victory and first prize of €60,000 after coming to the final table as second highest in chips.

The Roman, who knocked out Full Tilt Professional Raúl Paéz, commented before the final table started that “the Spanish players are much better than I thought. They are brave, technically skilled and aggressive: Luigi’s victory was also the first time that a FTPS event had been won by a non Spaniard. “At the beginning I thought that would be impossible for me to win” he said ‘but as the tournament progressed I began to get a good feeling about it”

Luigi took the title with a dramatic straight in the final hand, going all-in with a pair of fives against Tomás García’s A9. The flop came 9 spades, 2 hearts, 6 diamonds, the turn 7 spades and the river 8 hearts to seal the victory. García’s €35, 000 cheque for second prize took the edge off his disappointment, and could reflect that, as winner of the FTPS Grand Final 2009, the series is turning out rather well for him.

Third place went to local boy Víctor Mendicuti, ‘Mendi’, who proudly wore his Malaga Football Club shirt throughout the tournament. He had a lot to smile about, as not only did his beloved Malaga avoid relegation by holding Real Madrid to a 1-1 draw on the last day of the season, but he picked up a cheque for €20,000, and that weekend it was announced that, in a touch of the “Man Citys” a billionaire Middle Eastern Prince had brought the club. This was also the seventh final table that ‘Mendi’ had made in just under a year. Impressive stuff indeed from the youngster.