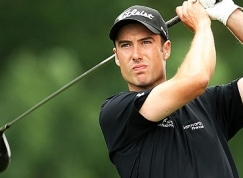 
The young Englishman played some outstanding golf to take the title

England’s Ross Fisher has been angling for a big prize all season, coming close at the ‘majors’ but he finally landed one of the biggest titles in world golf, the Volvo World Match Play Championship with a 4&3 victory over American Anthony Kim.

28-year-old Englishman Ross Fisher won the biggest title of his career so far, clinching the €750,000  champion’s cheque playing what he described as, “Flawless golf,” to defeat American Anthony Kim at Finca Cortesín.

The irony of a Wentworth-based golfer winning the first World Match Play Championship away from the London course in the 45-year history of the world’s longest-running match play event was not lost on Fisher, who said, “It would have been nice had it been at Wentworth, but everything moves on and Finca Cortesín is a sensational golf course.”

On his way to the final, Fisher dispatched a number of big-reputation players, Camilo Villegas, Angel Cabrera followed by Anthony Kim in the final.

“This is where I want to test myself, against the best players in the world and besides the ‘majors’ and the WGC events, this is a huge tournament,” he said, adding, “The defending champion qualifies automatically and barring injury, it will be an honour to be here in a year’s time to defend my crown.”

“There was not supposed to be a hole-in-one prize but Volvo kindly came up with a lovely Volvo golf buggy and dad is thrilled with it, a wonderful gesture from a great sponsor” he said.