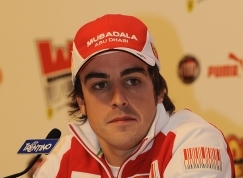 
Alonso says he prefers the atmosphere at the Italian team

Fernando Alonso is already in love with Ferrari and says the working environment is much better than at previous teams - especially McLaren.

The Spaniard, world champion with Renault in 2005 and 2006 before an ill-fated 2007 at McLaren led to him returning to the French team, made a series of digs towards the British outfit in his first official news conference as a Ferrari driver."I've felt comfortable from my first day. The team has welcomed me like a family. Ferrari, I think, is something unique in Formula One," the 28-year-old said.

"All of you have dreamed of driving Ferrari street cars, I'm the same. This will 100 per cent be my last team. I want to finish my career with a good taste in the mouth."

Alonso's season at McLaren was characterised by spats in the team and his relationship with Lewis Hamilton was uneasy at best.

Alonso, who replaces World Rally Championship-bound Kimi Raikkonen at the Italian team this season, has already spent time at Ferrari's Maranello base where staff love to talk. "It's a family environment and there's a passion for racing in the factory. The way of working really hit me. I was used to people sending an e-mail to someone 10 metres away. What I do is work 110 per cent with the team so if the team is not working 110 per cent, it's not right."