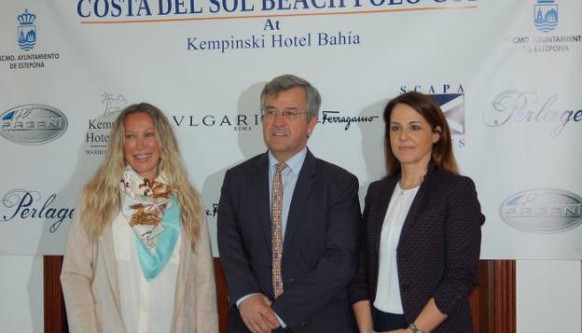 The 'Sport of the Kings'' Polo competition will be celebrated in Estepona 'Costa del Sol Beach Polo Cup 2018' first edition, May 19 and 20, 2018 Source: https://www.kempinski.com


Polo by the sea. A not very usual show that only some international capitals and Spanish towns like Tarifa and Vejer enjoy. The Beach Polo will arrive for the first time on the Costa del Sol with the 'Costa del Sol Beach Polo Cup' on 19 and 20 May 2018 in Estepona, specifically on the El Padrón beach area.

May 19 and 20 of 2018 will be displayed as the two days to celebrate the 'Sport of the Kings'' for the first edition of the ''Costa del Sol Beach Polo Cup 2018'' that will be held at the luxury Kempinski Hotel Bahia in Estepona. During two days of glamour and exciting polo matches, four international polo teams will compete to win the first place. Estepona is a town and municipality in the comarca of the Costa del Sol, southern Spain.

The competition will be held at El Padrón beach and four international teams will participate.

The event organizer, Isabel de Borbon, explained on May 4th during the official presentation of the event that Beach Polo is a variant of the traditional Polo with the difference that this event is played on smaller sand courts and with teams composed of only three players. instead of four as traditionally. However, she said the game will be handled by the same rules as the traditional pole. "It's great attraction is that the public is closer to the game, there are no long distances as in polo on grass, and this allows the viewer to appreciate the speed of this sport." In Estepona, four international polo teams will compete with around 50 horses.

Isabel de Borbón also commented that this game modality of polo is getting more and more acceptance and followers in cities such as Miami or Dubai and made clear that it will not be a competition for Sotogrande, but will be a "mutual support" between both locations.

Estepona mayor, Jose María García Urbano said; that the celebration of the 'Costa del Sol Beach Polo Cup 2018' is "another proof of the great capacity that Estepona has to host important and top-level events." He added that the city is turning to sport with projects such as the future athletics stadium or the Litoral Path.

He also explained that; the City Council has made all administrative and environmental arrangements so that this sporting competition can be held in Estepona and mentioned that the municipal operational brigades have been working for weeks in adapting the beach and the creation of tracks where the matches will be played.

Although bleachers and VIP areas will be established, the event is open to the public free of charge

Among the four international polo teams that will be part of this competition highlights the Argentine 'Jolly Roger - King of Polo', winner of numerous tournaments in Sotogrande and abroad. French, English and Swedish teams will also compete, as well as polo players, such as Jamie Le Hardy and Hernan Pieres.

As mentioned before. Entrance is free, food and drinks may be purchased next to the polo arena and at El Paseo Del Mar, the new restaurant complex at Kempinski Hotel Bahía.

There will also be a VIP marquee with ticketed entry, entertainment, fabulous food, and champagne. VIP packages are available for those who wish to join in the full event of Gala Dinner, Polo Chic Lunch, and VIP marquee entrance.

The tournament is supported by the Estepona Town Hall and powered by Isabel de Borbon and her polo events company Polo4Ever, being the first event of its kind on the Costa del Sol. Sponsors include Kempinski Hotel Bahía, Bvlgari, Scapa Sports and Perlage.

If you consider yourself a Polo fan and enjoy even more being close to the seaside, then this event is definitely for you! This is a great opportunity for everyone to come and enjoy this noble sport, and watch top polo players and their horses at close range, right on the sand.