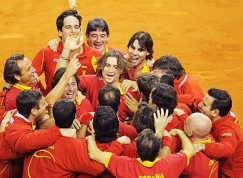 The Spanish team celebrate their victory


Ferrer the hero as Spain retain the Davis Cup

Spain won its fourth Davis Cup title at the weekend when Fernando Verdasco and Feliciano Lopez took the doubles to give the team an unassailable 3-0 lead over the Czech Republic.Spain also becomes the first country since Sweden in 1998 to retain the Davis Cup, after triumphing last year in Argentina.
"It was an incredible moment to return as captain after winning here nine years ago," said Spanish captain Albert Costa, who helped Spain to its first ever Davis Cup title in 2000, beating Australia at the same Palau Sant Jordi Arena in Barcelona.
Spain won again in 2004, defeating the USA.
On Saturday, Verdasco and Lopez crushed an exhausted Radek Stepanek and Tomas Berdych, who had lost both Friday's opening singles, 7-6 (9-7), 7-5, 6-2, in what was the Czech pair's first ever Davis Cup defeat in six matches.
In Friday's opening singles, world number two Rafael Nadal, who had limped out of last week's ATP World Tour finals in London without a single win, cruised past Berdych 7-5, 6-0, 6-2.
Then David Ferrer, ranked 18, came back from two sets down to beat Stepanek 1-6, 2-6, 6-4, 6-4, 8-6 in an epic match that lasted four hours and 17 minutes. After the win, the crowd, along with the Spanish players, chanted "David, David" in tribute to Ferrer's gutsy performance.
"We have won today, but yesterday we won two important points," said Lopez. "I would like to highlight the match that David played yesterday. The final is his."