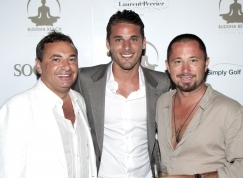 
The player is a frequent visitor to Marbella, where he is a partner in both Buddha Beach and La Sala

Fulham and Atletico Madrid are both showing interest in capturing Tottenham winger David Bentley. The British Press are reporting that the midfielder - one of the partners in Buddha Beach and La Sala -  is being chased in the transfer market by the 2009 Europa League finalists.

Martin Jol, who was appointed manager at Craven Cottage earlier this month, is believed to be looking for a new wide man and the former Blackburn Rovers winger fits his ideal mould. A move to Madrid could attract the 26-year-old England international, who is a frequent visitor to Marbella

The player has been told he is free to leave White Hart Lane by manager Harry Redknapp, along with teammates Niko Krankjar, Wilson Palacios, Giovani Dos Santos and Robbie Keane.

Bentley signed from Ewood Park in 2008 for £15 million but has struggled under Redknapp to cement regular football. In the January transfer window he was loaned out to Birmingham City

An eventful summer at Buddha Beach (4)