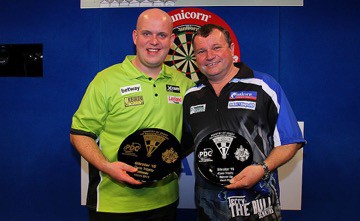 Stars from the world of darts, including World Champion Gary Anderson and world number one Michael van Gerwen, are preparing to return to Gibraltar for the fourth staging of the Gibraltar Darts Trophy from May 6-8.

The three-day tournament will see 48 players descend on the Victoria Stadium to compete for £115,000 in the third of ten PDC European Tour events being staged across continental Europe this year.

The 20 UK Qualifiers came from a knockout event in Barnsley last Friday and include former Gibraltar Darts Trophy finalists Jamie Lewis and Steve Beaton as well as Ross Smith, who landed a nine-dart finish in Gibraltar in 2013 and knocked out Phil Taylor in qualifying.

April's European Qualifier will provide a further eight qualifiers and will feature the likes of Dutch stars Raymond van Barneveld, Vincent van der Voort and Jelle Klaasen, while four Gibraltarian representatives will be found at the Host Nation Qualifier on Thursday May 5.

Tickets for the Gibraltar Darts Trophy, costing from just £5, can now be purchased online through www.buytickets.gi. For enquiries, please contact the Ministry of Sports, City Hall via +350 200 47592 or via email at mschy.info@gibraltar.gov.gi.

Tickets are also available in person at the event, subject to availability. Travel & Accommodation Packages available on request from the Ministry of Sports.

Fans attending the Gibraltar Darts Trophy can find out further information of activities to enjoy during their stay in Gibraltar, or discover more about the destination, through www.visitgibraltar.gi.