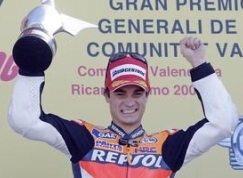 Spain's Dani Pedrosa took advantage of a Casey Stoner crash on the warm-up lap to win the Valencia Grand Prix, his second victory of the season securing third place in the MotoGP world championship.

Ducati rider Stoner was due to start on pole and was bidding for a third straight win in the final race of the year but was unable to make the start after he flipped high into the air off the bike on the warm-up lap.
Pedrosa led the charge from the front row and never relinquished the lead. The victory at his home race lifted the Honda pilot above the Australian to third in the standings behind compatriot Jorge Lorenzo and champion Valentino Rossi.

The last race meeting of the 2009 season turned into something of a Spanish celebration as there were also victories for local riders in both the 125 and 250cc races as well.

Rossi was awarded his World Championship title trophy at an awards ceremony on Sunday evening, broadcast live on Spanish TV