Buddha Beach on the podium 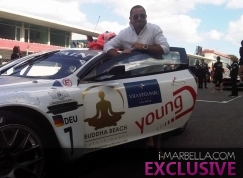 
A podium finish for the Young Driver AMR, sponsored by Buddha Beach at Portimão

Young Driver AMR, sponsored by Buddha Beach,  finished in a great second place in the Championship Race of the third round of the GT1 World Championship at Portimão/Portugal. Stefan Mücke (GER) and Darren Turner (GBR) scored with their first podium of the season in the Young Driver AMR-Aston Martin DBR9 with the second place at the demanding track at the Portuguese Algarve coast. Alex Müller (GER) and Tomas Enge (GBR) had bad luck and retired with a technical problem.


Once again, it was a strong performance of the Young Driver AMR pit crew, that made the difference. Stefan Mücke started fourth and chased the three leading Nissan until the mandatory driver change. A quick pit stop elevated Darren Turner into third position. When the leading Nissan suffered a technical problem, Mücke/Turner were promoted to second position and finally finished second and scored their first podium finish in the GT1 World Championship.

The Aston Martin in the pits before the race

“I haven’t expected a podium finish here, as this is a track, which is not well suited for your car”, Young Driver AMR team principal Hardy Fischer was very pleased with the result. “Our pit crew did an excellent job today and I’m really happy for Darren and Stefan. Stefan is now one and a half years in the team and had much bad luck in the past, so I’m really happy for him to score his first podium with us. Stefan and Darren will receive some success ballast now for the next race, but I hope they can also shine in our home Grand Prix at the Sachsenring. Alex and Tomas had really bad luck this weekend, but I have no doubt that they will fight for top positions again in our home race next weekend.”

The next stop for Young Driver AMR is now at the Sachsenring in Germany next weekend. To make sure cars and equipment will arrive in time at the Sachsenring, is a matter for the boss. Team principal Hardy Fischer will drive one of the trucks with the valuable freight by himself together with the Young Driver truckies back to Germany.