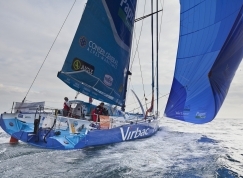 In the Barcelona World Race Jean-Pierre Dick (FRA) and Loïck Peyron (FRA) on Virbac-Paprec 3 have stolen the lead back from Foncia as they tack steadily upwind towards the Straits of Gibraltar. Dick lead out into the Atlantic in the first edition of the race but Virbac-Paprec 3 has close company in the form of an ongoing tussle with Foncia’s Michel Desjoyeaux (FRA) just over two miles behind and Alex Pella (ESP) and Pepe Ribes (ESP) on Estrella Damm in third around seven miles behind.

This leading group have slowed in a more inconsistent breezes this morning, but they are still in generally more favourable upwind conditions than their counterparts in the north. The Moroccan coast group, of Virbac-Paprec 3, Foncia, Estrella Damm, Neutrogena, Mirabaud, and GAES Centros Auditivos will be expecting to continue in directly upwind conditions for much of the day, which will drop off progressively to become very difficult for them. The northern group, closer to the Spanish coast, will carry on with disorganised light downwind conditions, with the likes of Président perhaps being able to pick up a few hours of thermal effect closer to the coast. In fact the teams in the north are low on options. They will have to stick with their strategy pretty much right to the exit door.

The leaders should be expected at the eastern entrance of the Straits about nine or ten this evening, depending how much the breeze does slacken off. And then it is anyone’s guess how long it might take them to get through to the point of Tarifa at 5’37 which is the ‘finish line’ for the first sprint stage. The North-South Mediterranean Trophy is at stake for the first to pass Gibraltar – the first of six round the course - but of greater concern to the skippers than the glory will be escaping the clutches of the Mediterranean and into the more consistent, stronger breezes of the Atlantic.