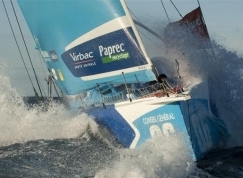 Virbac-Paprec 3 will be passing the coast later today


Jean-Pierre Dick and Loick Peyron in Virbac-Paprec 3, leaders of the grueling Barcelona World Race are expected to pass Gibraltar around midnight tonight.  They spent a day of precision manouvers off the Moroccan coast yesterday  getting to within 800 meters of the beach at one point. But it still seems like it will be at least offshore of Murcia before they may have some relief from their interminable upwind passage since the Equator. The final miles from there look light and unpredictable.

For Iker Martinez on MAPFRE it was a chance to explain their slightly problematic passage through between La Gomera and La Palma. The Spanish Olympic champion confirmed that part of the reason for their routing was to take brief advantage of La Palma's lee to effect what should have been a 20 minutes repair, but the combination of unexpected 30 and then 40 knots gusts and some unpleasant seas meant this short repair interlude turned into three hours of hard labour which cost them an extra 45 miles on leaders Jean-Pierre Dick and Loïck Peyron.

Martinez explained how that their 10 years plus of Olympic strength and conditioning training for the 49er has been a key factor in being able to drive their MAPFRE as hard and consistently as they have. And now, low on food rations, it is clear the double Olympic medallists are using some of that nutritional experience to manage their limited body refuelling, maximising sleep to just keep going to the finish line.

Martinez explained: " We are pretty tired with the food situation, physically this is an ultramarathon. Some days we have it when we are really tired, but it is not one of our biggest worries. I think we are all now thinking about the finish, not too long ago we weren't but now we are.

We try to sleep as much as we can to keep energy so that we don't make mistakes, and if they do like yesterday then we have the energy to deal with them and keep going. It is more than 10 years that we have been physically training. Training for the Olympics in China was pretty extreme, so I think that physically we were in good shape for this race, but I think we pushed very hard."