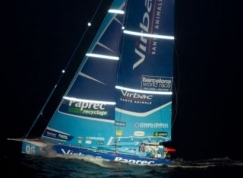 Virbac Paprec 3 crosses into the Atlantic in the early hours of this morning Source: Barcelona World Race


The leading boats made it into the Atlantic in the early hours of this morning, but the rest of the fleet are struggling to pass Gibraltar

Four boats crossed into the Atlantic by 0600hrs this morning but conditions in the Straits of Gibraltar are extremely tricky for the rest of the fleet in the Barcelona World Race. The transition between the two weather systems, the high pressure to the east, and the low pressure up to the north west, are contributing to a very difficult exit through the Gibraltar bottleneck. Jean-Pierre Dick (FRA) and Loick Peyron (FRA) on Vibrac-Paprec 3 were first at Gibraltar at 1955hrs  last night.

They were 2 hours and 40 minutes ahead of Michel Desjoyeaux (FRA) and Francois Gabart (FRA) on Foncia, who passed the longitude 5 deg 37m at 2235hrs. But this morning, between seven and eight hours later Desjoyeaux and Gabart have only made about 25 miles west from Gibraltar. Foncia's exit strategy saw them creeping along the Moroccan coast trying to get maximum relief from the current, less than one and a half miles off El Dique on Djebil Quebir at one point.

But the front duo have been rewarded by making more useful speeds into the Atlantic in just 5-7kts of breeze. Estrella Damm are believed to have been third out close to Mirabaud who passed into the Atlantic at 0050hrs this morning. Ryan Breymaier (USA) and Boris Hermann (GER) on Neutrogena, who were doing so well yesterday and last night, up to third place, have been making one step forward and two steps back at the mercy of the strong currents with next to no breeze. Only half a mile off the Spanish coast they are fighting the current but have made visible backwards progress at times and were still nine miles from Gibraltar and the escape door, now lying fifth.

Dee Caffari (GBR) and Anna Corbella (ESP) on GAES Centros Auditivos are still in slightly better breeze, upwind in the light westerly, and are catching the snared Neutrogena duo, but the GAES girls will also still have to deal with the worst of the transition too. But, in fact, as today progresses this difficult zone appears to move slowly east and by 1500hrs it looks like the  NE'ly airstream starts to take hold in the narrows. R

Behind them the first group of the chasing pack, those who chose the Spanish coast routing, Groupe Bel in the south now and President to their north, are still slow and are now 100 km behind the lead boat.