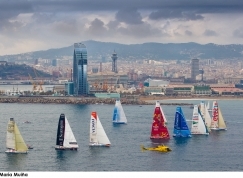 The Fleet leaves Barcelona at the start of the round the world race Source: © Jorge Andreu / Barcelona World Race

The weather was not so much Barcelona, more Breton or British, but it was the Laughing Cow, driven by a duo representing both the Mediterranean and Brittany, which led the 14-strong fleet away for the second edition of the Barcelona World RACE. Kito de Pavant (FRA) and Sebastien Audigane (FRA) on the red hulled Groupe Bel put their battle to be race-ready on time behind them and broke away from the 1300hrs start gun best.

Charismatic, pocket sized De Pavant, who hails from Montferrier some 350 miles east along the coast and knows the Mediterranean waters well, together with his tall, reserved but vastly experienced Breton counterpart, Audigane, led Michel Desjoyeaux and François Gabart – the master and his apprentice – up the short three-mile reaching leg. At the one turning mark off the Besòs river they were over one minute and 13 seconds ahead of Foncia before working back downwind parallel to the Barceloneta beach and disappearing off into the hazy, slightly grey afternoon, heading for the next 530 taxing miles to Gibraltar and the gateway into the Atlantic.

Groupe Bel leads the fleet as they head towards Gibraltar

Only time will tell how long Groupe Bel can lead the fleet, but their first few miles were a welcome reward to the team which ran tight to the deadline to be here, last to arrive in Barcelona at the very end of a frenetic schedule to have their IMOCA Open 60 ready after having to replace parts of the keel head mechanism which failed seven weeks ago to force De Pavant’s retirement from the Route du Rhum transatlantic race. Third around were the two GAES girls, Dee Caffari (GBR) and Anna Corbella (ESP), who led a sprightly looking FMC, the rejuvenated 10 years old veteran former Kingfisher in the hands of young Catalan Gerard Marín and his French co-skipper Ludo Aglaor, who had made an excellent start at the offshore end of the line and looked quietly relaxed and smooth around the opening miles.

The sun made one or two fleeting appearances, adding lustre and sparkle to the waters for a huge spectator fleet of some 450 boats, from tiny pocket cruisers to the laden, large sponsors’ launches. And the beaches from the iconic Hotel W start line all the way up to the turning mark were busy as thousands turned out to enjoy the spirited opening tussle.

The departure from the Moll Barcelona World RACE’s Race Fleet Dock was enriched by the full spectrum of emotions. From the scarcely contained happiness of the likes of Caffari and the Central Lechera Asturiana duo Juan Merediz (ESP) and Fran Palacio (ESP) - who bounced in unison on the deck of the yacht which they had struggled for the last four weeks to step a replacement rig after they broke their mast on their delivery passage - through to the heart-tugging private family hugs and kisses. But the farewells were quickly behind them and the serious business of the Barcelona World RACE takes over. A tricky passage down to the Alboran Sea and Straits of Gibraltar seems to be promised by the meteo specialists. Light winds with several transition belts, where the wind will all but disappear for the leaders to be replaced in time by new breezes, will test the skills and patience of the duos.