Anna round the Horn 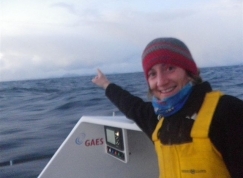 On Friday night Anna Corbella became the first female Spanish sailor ever to race around the legendary Cape Horn. The GAES yacht with its two women crew is competing in the Barcelona World Race.

On passing 'The bottom corner of the world' a delighted Anna commented “I am very very happy to get here. I hope this will inspire many people and many women to do sport and to fulfil their dreams."It is a magnificent experience, like getting to the summit and now you have to make the descent, which itself won’t be easy. We got there about 0030hrs UTC, it was getting dark and there was plenty of wind. We had the rock at eight miles away with poor visibility and many squalls. We were slow at times, not having the ideal sail combination we would have preferred.  With too little sail I thought we were going to get there after dark, but with just ten minutes before dark and with a bit of moon, between squalls the cape appeared. It was such an impressive, memorable image which instantly gives you goosebumps. It is the image that you have dreamed about for so long and there it is, we saw the light blinking at us.

"As you know we are quite into our celebrations, we had the last cake on the boat, we had a jamon (ham) which a friend had specially packed, some of our dried fruit and we opened a bottle of champagne as well. In between the gybes – and I think we did more gybes last night than we did in the whole Pacific – we had a busy night for food in between the squalls.

At that moment I thought of my parents and I thought they would be sleeping, but they were waiting for the call, and were shouting and had been watching us on the internet. They were shouting so loud that Dee (her fellow crew member)  could here them from the cockpit. It was quite amusing. They deserve the joy, they are part of this and it was a beautiful moment. They are the ones who started me in the sailing world and I dedicate this to them.”

Dee Caffari added " I think what Anna has done is awesome. I am very proud of her and I was saying to her not to underestimate the achievement. Because obviously while we are on board we are very confident we were going to round Cape Horn, but I reminded her that not everyone in the race has managed to do that, so it is great achievement and something I am very proud of.

"What was really funny was Anna had a gold hoop from her parents to put in her ear for rounding Cape Horn and I laughed because I would have two hoops in each ear now.”

The GAES yacht is now heading into the South Atlantic in seventh place, closely followed by Hugo Boss.