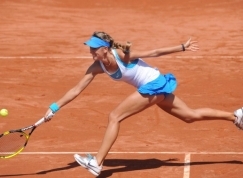 
Azarenka gives no chance to Errani and gets into the final

Victoria Azarenka will fight for the tournament title tomorrow after she knocked down brave Sara Errani, who was fighting hard until the very end, to finally lose in two straight sets (6-2, 6-1) in a match displayed on the Center Court that did not even last 1,15hrs.

The match started well for the Belarusian, who with the result 1 to 0 in her favor has managed to break her opponent´s service and began create a distance on the scoreboard. However, in the next game Errani hit the ball back at Azarenka´s field and this time it was her who broke the service and recover the lost game 2 to 1. Azarenka´s powerful shots, both the backhand and drive, made useless all Errani´s returns and attempts to go up to the net to win her service in the fourth game, which she finally lost. From this point, Azarenka was playing without pressure, measuring out her game and making her rival to run across the court. In the seventh game Azarenka´s physical and mental superiority was obvious. The Belarusian managed to recover three break points to take the game and establish 5 to 2 result on the scoreboard. Then, she simply had to keep her serve to win the first set.

The second set was very similar. Azarenka was leading the match thanks to her potent forehand and even though Errani tried her best she was helpless. In the end, the current world number 6, has won the second set 6-1 and has earned a place in the grand final tomorrow.

After winning Masters Tournament in Miami last weekend, Azarenka finds herself in the sweetest moment of her career. If she wins the tournament tomorrow she will reach the fifth place in the WTA ranking, the highest of her career. On the other hand Errani continues with her damnation of not being able to win the players from the Top Ten. In fact she has not won any of the last 21 matches she played against any of the Top Ten players in the world. Thus, the Italian who reached the quarter-finals in her first participation and the semifinals in the second edition could not climb to the next level to play the final in this edition of Andalucía Tennis Experience 2011.