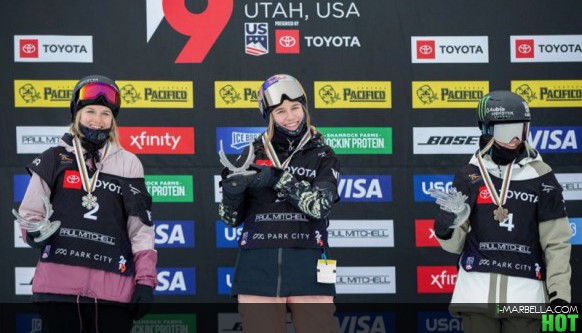 
Estonian Kelly Sildaru shocks the public and Olympic champion Cassie Sharpe to snatch the gold medal in the women's ski halfpipe final at the 2019 Freestyle Ski and Snowboarding World Championships.

Kelly Sildaru, who won the Gold Medal at the Park City women's freestyle skiing race, had to do a trick for the victory that hadn't been done by any woman before.

Kelly Sildaru, from Tallinn, Estonia who turns 17 in a week from now, started the competition poorly, earning 51.80 points in her first run, in the last place. Reigning Olympic champion Cassie Sharpe took the lead in the women's' event, at Park City, Utah, with 94.40 points.

Sildaru, who missed most of last season due to a knee injury, just before the Winter Olympics in Pyeongchang, South Korea, had earlier dropped out of the big air competition in Utah, to focus on the slopestyle and half-pipe events. Subsequently, adverse weather conditions saw Sildaru cut out the slopestyle event as well.

Her second run saw an improvement to 88.00 points, which converted her to 95.00 points on the final run to take the title, ahead of Cassie Sharpe, going for broke with a 1080-degree axis turn, something which neither she nor any other woman in the field had previously managed to successfully pull off.

''There was nothing else to do,'' Sildaru said afterward. ''If I wanted the best result, I had to give it a try. Fortunately, it paid off. I'm super happy!'' she went on.

Thanks to Sildaru's gold medal, Estonia is ninth place in the general medal table. Similarly to Estonia, one of the gold medals won by Park City World Championship was Belarus, Czech Republic, and Kazakhstan.

In total, 20 athletes came to the podium. From our close neighbors, Russia was the third team of 3 gold, 2 silver, and 1 bronze medals. This time Sweden and Norway both won one silver medal. Finland was honored.